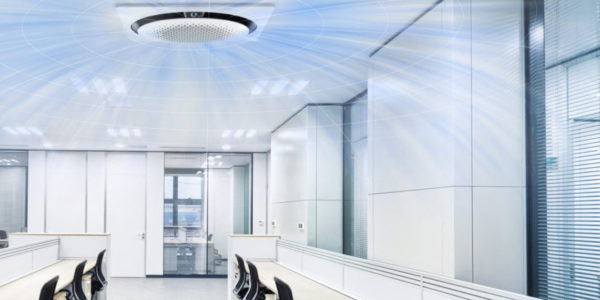 According to predictions made by experts, by the year 2050, two-thirds of the households around the world would have air-conditioners installed. This is brought about by the continually rising temperatures experienced worldwide.

However, as renewable energy resources are yet to be improved and polished before its full implementation, it is more likely that this added energy demand would mean additional greenhouse gas emissions, contributing to global warming, which would eventually circle back to higher temperatures. Still, there is some good news.

One way to combat hot temperatures depends largely in the building design. Experts say that there are strategies that can be done to come up with cooler buildings even from the design phase itself. These include windows and shading systems, paints and glazes, and water evaporation. Employing these strategies could lower the demand for mechanical air-conditioning systems that require added fuel or electricity demands:

For windows and shading, the simplest way to keep heat out is credited to good insulation and well-positioned windows.

To combat the sun and heat during the summer, a building should be designed with external horizontal shadings such as overhangs and louvres. This way, there will be no need to open up windows as it is possible for the air inside the building to rise in temperature when doing so. Horizontal shading would be able to block the sun and provide a constantly shaded and cooled area. On the other hand, external shutters could be useful for east and west-facing windows. There are several modernized external shutters available in the market that could blend in nicely with modern buildings.

For paints and glazing, manufacturers are now able to provide special paints with pigments that are designed to reflect solar radiation, reducing surface temperatures by more than 10°C. There are also high-performance solar glazing that can be used on building windows, keeping the sun’s heat out while letting daylight in the building. There are also thermochromic paints available that can absorb light and heat at lower temperatures and reflect heat at higher temperatures.

Water evaporation is one of the most common ways used by designers to cool down a building. As water absorbs heat and evaporates, the warm air would rise and would push the cooler air downwards. This concept has been the fundamental idea behind cooling systems that use water and natural ventilation in reducing a building’s indoor temperature. For many buildings, water is evaporated in towers, wind catchers, or even double skin walls. For this concept to work, there should be a feature that creates a channel where hot air and water vapour can rise as the cooler air would sink. This is effective for areas with relatively dry weather. System maintenance is also essential and controlled carefully. For buildings with successful water evaporation cooling systems, the temperature could be lowered by as much as 14°C to 16°C.

Want to learn more about precision cooling and how you can save on your budget while saving the environment?

Air Conditioning Maintenance Tips for your Office
21 Aug 2018
BT-SA supply integrated security solution for financial services firm
15 Feb 2017
Get the Most from Your Home and Office Air Conditioner
26 Aug 2019
Menu
This website uses cookies to improve your experience. If you continue to use this site, you agree with it.
OK